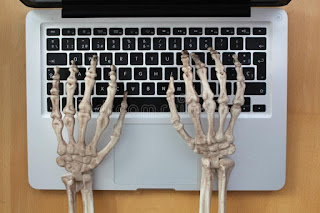 I’ve been writing and teaching writing for almost forty years now, and as you might imagine, I’ve given feedback on a lot of student stories – I mean, a lot. I see many of the same problems with beginners’ fiction, especially horror and dark fantasy, since that’s what I specialize in. While I know there’s no such thing as a fool-proof formula for writing a short story, as a teacher, I try to give students enough guidance in terms of structure to get them started on their way. This morning, as I was reading a couple stories for feedback, it occurred to me that it might be helpful for beginners if they had a story worksheet that they could fill out, and so I decided to make one.

A couple words of caution. A worksheet like this isn’t for everyone. If you find it stifling rather than inspiring, don’t use it. (Although, if you ever find yourself blocked, you can give it another try and see if it helps.) You don’t need to provide information for every item. Fill in however much or little you want. Hell, you can just read over the worksheet then sit down to write without filling in anything. This isn’t a school assignment. It’s a tool to use however you see fit. Also, the worksheet is a basic one. It doesn’t cover all the ways that a story can be structured. How could it? Each time we write a story, it’s at least a little different from any we’ve written before, than any story anyone’s written before. But I think the worksheet provides a decent framework for writers still learning how to write short stories. Also keep in mind that the areas I include on the worksheet are what I think are important for short fiction. Other writers would present items/have different advice – which is as it should be. You should learn from as many people as you can, take what works for you, and forget the rest.

One last thing to consider. I’ve created this worksheet to help people write horror stories, but it’ll work for many different kinds of fiction. For example, one item on the worksheet is the Bad Thing. In horror, that could be a killer, a monster, a malicious force, but in realistic fiction, it could be a decaying relationship or someone realizing they’re living a life that’s not genuine to who they really are.

Okay, I lied. Here’s the last thing to consider. Feel free to adapt the worksheet to your own needs, adding or subtracting elements as you wish. Feel free to use it in writing groups, and in classes and workshops you teach. I’ll be grateful if you give me credit for creating the worksheet, but I don’t care if you do. I only care that the worksheet helps people write more successful stories.

All right. Let’s get started.

Short stories should focus on a single main character and have only one or two supporting characters. They’re short, so there’s not a lot of room for a larger cast.

Horror stories tend to have one of two characters types. A Normal Person (for lack of a better phrase) or an Abnormal Person. Poe’s “The Tell-Tale Heart” is a prime example of an abnormal main character. The character’s abnormality is usually a psychological one (such as a pathological fear of being caught outside in a thunderstorm) that may or may not have a direct bearing on the main story threat (although it often does). Having an abnormal main character can add to the overall weirdness of your story, but it might be harder for readers to relate to your character.

Does your main character directly confront problems? Indirectly confront them? Seek others’ help in dealing with them? Ignore them for as long as possible? Try to avoid them completely? Manipulate others into dealing with them? How your character deals with problems gives your story its shape. It’s the most important thing you can know about your character.

In horror stories, bad stuff happens. Characters are under stress and they experience fear. You need to know how they react to stress and fear, and what toll stress and fear takes on them. (This may overlap with how they solve problems.) Do they keep going despite stress and fear? Do they feel they have to stop partway through the story? (Don’t let them!) Do they deny bad things are happening? Do they find their sense of reality shaken? What will they do when pushed to their breaking point and beyond?

What makes your story different? A lot of beginners’ horror stories have only the most basic concepts. There is a ghost. There is a killer. There is a werewolf. Those aren’t full-fledged concepts, though, and there’s nothing different about them. Recently, I was asked to write a story for an anthology dealing with classic monsters. I chose to write about a werewolf, and the concept I came up with is that when a member of the pack gets old, he or she goes into the woods, and a loved one “hunts” them to give them a final fight and a chance to die what, to their kind, is a dignified death. Werewolf is a trope. The concept is the approach to or spin on a trope. It’s what you do with a trope.

A lot of time in beginners’ horror stories, the Bad Thing is merely a trope – a witch, a zombie, a haunted house. But a Bad Thing should have some connection to the character. So instead of writing about a character encountering a generic ghost, write about a character confronting the ghost – hopefully, an atypical one – with a connection to them. Maybe your character must confront the ghost of a dog that he or she failed to watch properly as a child, and the dog got out of the yard and was killed. The character feels guilt and the dog-ghost feels that its master betrayed it. I’d end this story with some kind of twist, like the dog actually wanting the character to die and join it as a ghost so they can be together again.

A short story should focus on a single emotional core. The dog-ghost story’s emotional core is guilt and that guilt is centered on one specific incident – the character’s failure to properly supervise the dog and the dog getting killed because of it. Everything in the story, whether directly, indirectly, or symbolically, should connect to the emotional core.

For the dog-ghost story, the most obvious connection is the character’s relationship to the dog, and his or her guilt over the dog’s death. I’d extend this to the rest of the character’s life, and have them become hyper-vigilant as an adult, maybe working as a security professional in some capacity. If the character’s need to watch over others becomes pathological, then he or she would become an abnormal character.

The Confrontation Point is when your main character is forced to confront the Bad Thing. It’s what your story builds up to. These are small encounters with the Bad Thing, incidents that may be direct or indirect encounters, and which become increasingly worse/bigger/more blatant as the story goes on.

Your main character comes face-to-face with the Bad Thing. What happens? In horror, the most clichéd ending is “. . . and then the character died.” Try to avoid that. See if you can have the Confrontation Point be something that both grows out of the emotional core and which also isn’t a cliché. For the dog-ghost story, I would have the ghost-dog chase and knock down the character. The character thinks they’re going to be killed, but the ghost-dog licks their face (which sets up the ending). Yeah, the character dies, but they end up as a ghost companion to their dog.

The encounter with the Bad Thing is resolved in a way that makes your reader say, “Whoa! I did NOT see that coming!” This could be a positive ending or a negative one. Your character succeeds fully in obtaining their goal, succeeds partially, fails completely, fails partially, succeeds or fails in an unexpected way. I often go for what I think of is a weirdly happy ending. I’ve already said that my hypothetical ghost-dog story ends with the main character becoming a ghost and staying with the dog. The character is dead (which is a failure to survive the encounter) but they’re happy being reunited with their dog and are free of the guilt they’ve carried for so long (an unexpected success). In horror, if you can give your reader a last scare, a final eerie image or idea, so much the better.

·         Straight (Beginning, middle, end). In general, this is the best approach for beginners to take. When you get good at this, you can try more advanced narrative approaches.

·         Nonlinear (This is like a mosaic approach; events are presented to the reader in whatever order you wish.)

This is the beginning that your readers will read. Start as close to the Confrontation Point as possible – always good advice for writing short fiction.

May not be the Narrative Starting Point. An Inciting Incident is what kicks off the story problem (which in horror is the Bad Thing). For the dog-ghost story, the dog’s death is the inciting incident. My Narrative Starting Point might be when the dog’s owner, now grown, drives past his or her childhood home for the first time since the dog’s death. (The family moved shortly after.) The ghost-dog follows the character home and the story gets moving.

That’s it for the worksheet. I’ll put the items without any explanation below, so you can copy them and use them more easily. I hope you find this worksheet useful! If there’s something you think should be added to the worksheet, let me know.

Want to read more of my writing advice? I’ve got two books you can check out.

Writing in the Dark is my Bram Stoker Award-Winning book on how to write horror. It’s available in both print and e-editions.

You can order direct from Raw Dog Screaming Press here:

From Barnes and Noble here:

The Art of Writing Genre Fiction, written with Michael Knost collects craft essays from both of use. (Currently only available in print.)

WANT TO STALK ME ON THE INTERNET?

Want to follow me on social media? Here’s where you can find me: