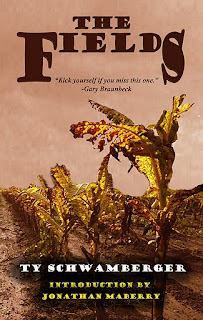 Happy Holidays, everyone!
From time to time, I'll be asking guest writers to answer a few questions so that you can get advice from perspectives other than mine (even though mine is AWESOME, right?). First up -- Ty Schwamberger!

What's the best piece of writing advice you ever received?
Ty Schwamberger: When I started writing, I didn’t have someone to show me the ropes. I had to learn things on my own. Although, a few years ago I did receive a good piece of writing advice from Brian Keene while at a convention in Nashville, TN. The conversation started with me telling Brain what I was currently working on, my future plans, etc. I don’t remember what spurred his question but Brian asked, “Do you want to be a writer or a businessman?” I thought about it for a moment and replied, “I want to be a writer.” Now that it’s a couple years later, I think someone that wants to write fulltime (if that’s their goal, anyway) needs to be both – a writer and a businessman. But, Brian wasn’t saying that the business side of writing isn’t important. No. Instead, he was stating that at the beginning of every writer’s career, you need to focus on the actual craft of writing a good story. Then, once you start getting some published stories under your belt, that’s the time to start worrying about the business stuff.

What's the worst piece of writing advice you ever received?
Ty: This is a tough one for me to answer. As I mentioned before, I didn’t have a mentor to show me the ins and outs of the publishing world. I had to learn things as I went along. I always knew that it would benefit me in the future, and I think it has, but it was definitely tough going my first year in the business. There was one particular publisher, whose name I won’t mention here, that kept telling me “this is the way it is in publishing.” Later, of course, I found out that the majority of things they had told me were bullshit. But, it was out of that experience I learned what to watch out for in the future.
To give a good piece of writing advice from the several bad ones I got from a certain publisher when I first started in the business…
Always do your research before signing on the dotted line. Or else, you might just get stuck in a long-term contract that’s benefiting the publisher more than you. Always remember, a contract should be equally beneficial to both the publisher and you as the writer.

What's something you've learned about writing or publishing that you wish you had known when you were first starting out?
Ty: It was mentioned earlier that an aspiring author should focus on the craft of writing when starting out. Now, I’m going to throw a monkey wrench into the conversation by saying, “The business side of writing is just as important as the creative side.”
Why, you ask? I’ll explain. But first a brief history…
Few people know this, but I didn’t start writing until early 2008. It was right after I read a couple novels by Jack Ketchum and Richard Laymon that I said to myself, “Hey, I can do this.” That’s when I sat down and pounded out 100k words. I didn’t really know what the hell I was doing, but three months later I had finished my first novel. It was subsequently published (looking back, it really shouldn’t have been) later that year, then away I went. During the first year I was writing, I wasn’t really focused on writing as a career. Instead, I was just having fun doing it.
After the one-year mark, and a few published short stories later, I realized that it would take a lot of work, but writing was definitely my calling and something I wanted to do fulltime one day. It was then at the end of 2009 and the beginning of 2010 that I started pitching ideas to publishers. I’m still not sure if it was something special I was saying in my letters or if potential publishers just saw potential in me (perhaps it was a little of both). That’s when things really started to take off. From my first published book, through the end of 2012, I should have close to a dozen books out there. Not too shabby for someone that started writing for the fun of it just a few years ago.
So, why did I somewhat contradict an earlier statement? It’s to show all the aspiring authors out there, that if writing is something you truly want to do, and you work really hard at it, that anyone can do it. But, if you want writing to be your fulltime dig someday, you have to know the business side of things, as well. Like any successful businessman (or woman): you need to study your chosen industry, learn market trends, test the waters with your product, go to conventions and meet potential publishers and the writers you enjoy reading. The publishing world can be full of trials and tribulations, but if you play your cards right, and work really hard, you can achieve what you’ve always loved doing.
To borrow from my literary idol, Richard Laymon, “In spite of all the drawbacks, the writer’s life is a great life. If you can manage to pull it off. And I believe anyone can. All it takes is desire, persistence, guts and a little bit of luck.”
Besides, who am I to disagree?

Ty Schwamberger is growing force within the horror genre. He is the author of a novel, multiple novellas, collections and editor on several anthologies. In addition, he’s had many short stories published online and in print. Two stories, "Cake Batter" (released in 2010) and "House Call" (currently in pre-production in 2011), have been optioned for film adaptation. You can learn more at: http://tyschwamberger.com/.

Ty’s zombie novella, THE FIELDS, is now available from The Zombie Feed Press, an imprint of Apex Publications. You can purchase a copy here: http://www.apexbookcompany.com/collections/the-zombie-feed/products/the-fields-by-ty-schwamberger or here: http://www.amazon.com/Fields-Ty-Schwamberger/dp/1937009025/ref=sr_1_1?s=books&ie=UTF8&qid=1325043175&sr=1-1

Posted by Tim Waggoner at 11:57 AM No comments: