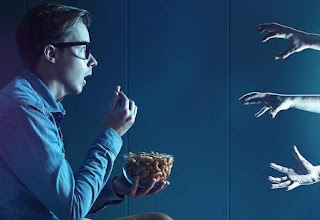 In the aftermath of 9/11, horror writers went through an existential crisis. “How can we continue writing horror fiction,” they asked, “when the world is filled with real-life horrors that are so much worse?” Was it even moral to write horror fiction in the face of terrible tragedies? Were we mocking them? Worse, were we somehow contributing to them?

After the recent mass shooting at Uvalde elementary school in Texas – in which an eighteen-year-old gunman took the lives of nineteen children and two adults and injured seventeen others – writers of dark fiction are doubtless asking themselves the same questions that they did when the towers fell. I know I am.

I wrote about the importance of horror fiction to humanity in the first chapter of Writing in the Dark, which I’ve posted below.

Originally published in Writing in the Dark, 2020

Years ago, a student asked me why I write horror. “You seem like such a pleasant person,” she said.

I looked into her eyes and smiled a slightly wicked smile.

“Writing horror is what keeps me pleasant.”

We all have a dark side that whispers to us, a side that we struggle against and ultimately need to make peace with if we don’t want it to destroy us. In many ways, that’s probably the most primal story of humanity. Horror fiction gives us a safe way to explore and – hopefully – come to terms with our dark side.

Horror stories allow us to confront our deepest fears through the buffer of fiction. Wrestling with the darkest questions of human existence – why is there violence, pain, cruelty, and death? – can be emotionally overwhelming. These questions can be too intense to deal with directly. Like an eclipse, the only way to safely view these aspects of life is indirectly. Horror allows us to do this. Horror can serve as a buffer in another way. It can distract us from the horrors of the real world, all of which are far more terrifying than any story about a ghost or vampire. Horror writers are like dark clowns that caper in front of our readers, making grotesque faces in the hope that the audience won’t look over our shoulder and see the true darkness of existence behind us.

Not that most readers think that deeply when they pick up (or download) a horror book. They’re looking to be entertained, and probably even more so with film and television horror. They want to enter a dark dream and experience the delightful frisson that comes from feeling they’re in mortal danger, when in reality they’re perfectly safe. It’s the same for people who enjoy a trip through a carnival spookhouse. It’s a fun experience that gets the blood pumping, that jolts people out of their everyday existence and – if only for a short time – makes them feel alive. And if this was all horror did, it would still be important. Who doesn’t want to feel really alive? But even when it entertains, horror can do so much more, be so much more.

Horror is as much, if not more so, about an individual character’s experience than it’s about whatever dark force confronts them. There’s an old saying that an adventure is someone else having a hell of a tough time a thousand miles away. Any type of fiction can teach us more about ourselves and our fellow humans by showing us how particular characters deal with conflict – both external and internal. But horror turns up the conflict all the way to eleven. How do characters deal with the unknown, the impossible, the nightmarish? How do they deal with being exposed to – or tempted by – evil, whether demonic, mundane, or symbolic? What would we do in those situations? Would we be smarter, braver, more resistant to corruption? Would we be smart enough not to go into the dark basement, to resist opening the Necronomicon, to not invite the vampire into our house? Could we hold onto our sanity in the face of the awful things we encounter – or become? Psychologists suggest that reading and watching horror allow people to develop stronger survival skills. We engage in fictional scenarios to explore what we would do in dangerous situations. How many of you have spent time arguing with friends about the best way to survive a zombie apocalypse or how you’d react during a home invasion by a Michael Meyers-like serial killer?

All fiction can make people more empathetic by simply dropping us into a character’s life and allowing us to experience how he or she tries to deal with problems. But horror fiction allows us to follow characters pushed to the absolute limits of human experience and beyond. The more pain – of all sorts – a character experiences in a story, the greater our empathy for that character.

Horror also allows for deep catharsis. The ending of the movie Jaws is a perfect example. After an entire film dealing with an implacable inhuman force, Sheriff Brody – clinging to the mast of the sinking Orca and literally in the shark’s environment – manages to kill the beast at the last moment. And the resultant explosion is a huge catharsis. When characters not only survive but triumph against dark forces, we feel relief. We also feel that if characters in a story can do it, maybe we can too in real life. But good horror isn’t predictable, isn’t safe. Maybe the heroes succeed in banishing the evil, maybe they don’t. Maybe they’re defeated by it, changed by it, become part of it. Or maybe they only believe they’ve won, but it’s a temporary victory at best because the evil returns in the sequel. (I contend this, aside from being a marketing tactic, reflects how we deal with darkness in our own lives. We can never banish it entirely. The best we can manage is a holding action or temporary respite until it returns, and it will keep returning until it finally claims us. How’s that for a cheery thought?) Uncertain outcomes like these keep readers and viewers on their toes mentally and force them to deal with the more complex and mixed emotions uncertain endings bring.

Horror also offers another kind of catharsis. We get the chance to experience what it’s like to be the monster, to not be constrained by morality or even our humanity. We can stalk, torture, maim, kill, despoil souls, destroy worlds, all without ever committing an actual act of violence in the real world. We can get in touch with our dark side, explore it, map it, acknowledge it . . . and once we do, it ceases to have power over us. Or at least, its power is lessened. We’re no longer afraid of thinking “bad” thoughts or imagining “bad” things. It’s like The Purge, only without all the blood, death, and screaming.

Horror can be deeply existential, too. How can we mere mortals hope to defeat all the things that make up Darkness with a capital D: death, disease, violence, temptation, degradation, insanity? What does it mean to be human in a world where the dead can return to life and seek to drain your blood or devour your flesh? What does it mean when otherworldly forces – infinitely more powerful than we are – seek to destroy or dominate us? What does it mean to be human when the monster is inside us, growing stronger every moment? The vast majority of audience members don’t think this consciously about the horror they consume as entertainment, but subconsciously? I believe they do engage with the existential questions horror raises on that level, just below the surface of everyday normal thought.

Horror can provide comfort for the weird ones among us. (And I count myself as a member of this tribe.) With horror’s focus on monstrous distortion – on Otherness – those of us who for one reason or another don’t fit into society’s paradigm of normal can find a place to belong. My wife once told me, “You talk about monsters as if they’re your best friends.” That’s because in many ways they are.

A lot of you reading this might be thinking that literature of any sort has the potential to do all the things I’ve discussed so far – and you’re right. This proves my ultimate point. Horror is literature, and it’s just as important and vital as any other type for the health and growth of humans and their culture.

This sounds cool and all, you might be thinking, but I like to read and write horror because it’s fun.

There’s nothing wrong with fun. If we didn’t have fun from time to time, imagine how miserable our lives would be. But I believe even popular fiction meant primarily for entertainment can fulfill a higher purpose, too. We all know that entertainment can provide an escape from our everyday lives, but it wasn’t until my senior year in high school that I truly understood what this meant.

There was a small bookstore in the town next to ours. (This was back in the pre-Amazon past, when such places still existed.) My dad and I were browsing the bookshelves, and I was happily surprised to see a new novel by Piers Anthony in his Xanth series called Centaur Aisle. I’d loved the first three books in the series and had no idea there was going to be a fourth. Dad and I went up to the register, and when he saw the book I was holding, he asked, “Do you mind if I read it first?” I was shocked. In my family, whoever bought a book was always the first one to read it. No exceptions.

My mother – who suffered from a number of health problems – was scheduled for surgery the next day. The procedure wasn’t a very serious one (or so my parents claimed), but I understood then that my father was worried, and he wanted something to distract him in the hospital during my mother’s surgery and recovery. I said yes, of course. And I realized then that popular fiction of all kinds – fiction written to be fun – has a profound power. It can provide comfort to someone who’s scared. It can take someone’s mind off their worries, help them get through some of the hardest times in their life.

Not only do horror writers work in a genre with a long and rich history, the stories we create perform numerous important functions for people as individuals and for civilization as a whole. So if anyone ever asks you why you’re wasting your time writing horror instead of “real” fiction, tell them, “Horror is as real as it gets, baby.” Then for good measure hiss and bare your fangs, then get back to work.