How I Try to Avoid Racism in My Writing 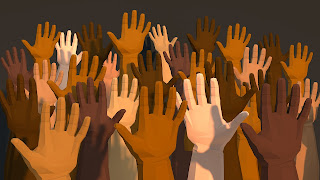 I wrote the following in the latest edition of my newsletter, which went out yesterday. I thought I'd post it here as well.

Recently, a small-press horror publisher posted the back cover copy of one of their forthcoming books. The story revolved around a terrorist plot to exterminate the world’s white people using a plague genetically engineered to only affect Caucasians. The plague succeeds, 98% of white folks die, and world civilization collapses. The premise seemed more than a little problematic, and the plot description made it sound even worse. When I first read it, I thought, “This sounds racist as fuck!” And I wasn’t the only one. On social media, many horror authors were appalled by the description and said so. Some vouched for the author (a white man), saying he’s a wonderful guy, has been very supportive of upcoming writers over the years, and is by no means a racist. Besides, some added, people were wrong to judge a book by the publisher’s description! Others said, “Uh, dude, that’s what cover copy is for – to help a reader decide whether or not to buy a book.” The writer and his supporters were baffled that anyone might view the premise and plot description as racist, and the publisher, perhaps unwilling to deal with the fallout over the situation, decided to close shop.

(Since I originally wrote this post, I've learned the publisher wrote the synopsis and posted it on social media without showing it to the author first.)

I’m not going to name the author, book, or publisher. If you don’t already know who they are, a couple minutes of digging on social media or Google will fill you in. I will say I’ve been acquainted with the author for years, he’s always been supportive of me, as well as many other writers. I’ve heard him described more than once as an elder statesman in horror. But does this mean he can’t be unconsciously racist? Or at the very least be tone deaf to racial issues?

Of course not. If you’re a white person raised in America – like me – you’ve grown up in a culture steeped in racism, and because this culture has been designed to privilege you, you can never be fully aware of how it’s shaped you and your attitudes. And if you decide to write about racial issues in your fiction, you’ll do so from a perspective of privilege, and even if you have the best intentions, there’s an excellent chance you’ll screw it up. We may never be able to fully transcend our acculturation, but that doesn’t mean we can’t try to learn, grow, and do better.

What can you do to try to deal with these issues when it comes to writing and being part of the writing community? Some thoughts . . .

·         I wrote a previous blog entry about dealing with diverse characters when writing fiction. You can find it here: https://writinginthedarktw.blogspot.com/2021/11/writing-characters-from-diverse.html

·         I live in a diverse world, and I want my fiction to reflect that, but I won’t tell a story that’s not mine to tell. I won’t write a story that centers on the identity of someone from a different background than myself. I feel totally comfortable writing characters that aren’t cishet white guys like me, but only when their race/gender identity isn’t central to their role in the story.

·         I examine my ideas for possible racism (and any other -isms, for that matter). If I write anything that has racial elements to it (or gender elements, LGBTQ+ elements, disability elements), I ask myself why do I want to write about these elements, what purpose do they serve in the story, and how might they be perceived by readers? My intent as a writer is important, but my execution of these ideas is far more important. It doesn’t matter what I tried to do, only what I did do. If I have any doubts about my ideas, I seek out beta readers who can let me know if my execution is flawed.

·         I try to read the damn room. Thanks to years of Trumpism, racial, sexist, homophobic, transphobic, and anti-intellectual attitudes and tensions in America are high. Any story I might write which deals with these elements is likely to cause strong reactions in readers right now. I try to be mindful of this and proceed accordingly. Maybe I’ll decide to not write the story. Maybe I’ll rework it to minimize or avoid any potential negative response. Maybe I’ll write it but tread carefully.

·         I listen to readers, especially people of color. This one’s more of an intention right now, since so far I haven’t received any negative feedback on my portrayal of non-white, non-cishet characters. But even if I feel I did a good job, if readers don’t think so, I intend to listen to their criticisms without being defensive. If I agree that I’ve made a mistake in my portrayals, I’ll apologize, work to repair whatever damage I may have done, and actively work to do better in the future.

·         I try to be a good literary citizen and lift up people of color (and others too). All aspects of American culture have been designed to privilege white people (and straight men and abled people), so I do what I can to help level the playing field. I do this in simple ways, by sharing people’s posts on social media, by mentoring people, by being available to answer questions or blurb books, and by treating all writers – regardless of background or level of experience – as colleagues. And I’ll keep looking for ways to lift others up as long as I live.

If you’d like to see how I do with diverse characters, some of the main characters in We Will Rise (out this July) include a black woman, an Asian woman, a Muslim man in his early twenties, and a teenage trans man.