FROM SCRIPT TO BOOK PART 2 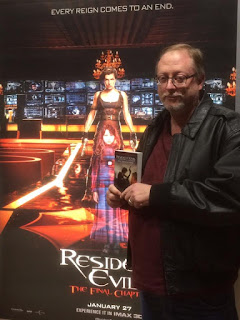 I was surprised that everything in the movie was in the script I had to work with. A few things were cut entirely and a few scenes were shortened, but what was cut had no bearing on the story or characters (for the most part), so no surprise that this stuff was left out. (And in my opinion, leaving most of those things out improved the movie.) Nothing was added. I was also surprised by how much of the action occurred exactly how it was detailed in the script. I expected some of the action scenes to be somewhat different because changes were made as the action scenes were blocked out and filmed. And while I'm sure that happened to a degree, it was much less than I thought. Several scenes in the script were written to create a build-up of suspense. Those scenes still exist in the movie, but they occur at straight-ahead action-movie speed. It was so strange to watch a sequence that was exactly like in the script go by so much faster than what the same scene felt like when I was writing it. I had to imagine those sequences much slower so I could write about them, so a sequence would go by in a few seconds in the film, and I'd think, "Well, hell, that took me a couple hours to write!"

This time the experience watching the movie seemed more natural than watching xXx: THE RETURN OF XANDER CAGE. Even though I knew everything that was going to happen (mostly), I was able to watch the movie as a movie, while still mentally comparing it to the script and my novel at the same time. I didn’t feel as if I was able to watch XANDER as a movie in and of itself. The majority of THE FINAL CHAPTER followed the script exactly, with only a few minor scene trimmings here and there. Since Paul W.S. Anderson wrote the script and directed the film, it was no surprise to me that the movie was faithful to his script. There were two relatively major additions: one an action scene in the beginning of the film and the last bit at the end. If the first trailer had come out as I was writing the novelization, I could’ve guessed at the additional action scene (if not the specific details), and I would’ve placed it more or less in the same spot it appears in the finished film. (I SO wish I’d seen the trailer earlier; I’d have loved to write that scene!) There were a LOT of specific details that weren’t in the script that I had to guess at while writing – things like exact weapons characters used, how some of the tech looked and operated, etc. And some of the tech that was spelled out in the script changed a little for the movie in terms of appearance, if not in function. Some of the action was spelled out in the script and occurred on screen the same way, but a lot of specific action moves were added during filming, especially during hand-to-hand combat sequences. (I had to guess at a lot of the specific fight moves when I wrote the book). All I had to work with was the script, so while I was writing I scoured the Internet for every single image from the film I could find, including selfies actors took on set. This allowed me to get a better idea of what weapons the characters carried, how they were dressed, etc. This also allowed me to guess at one element that was dropped from the script so I could leave it out of my book. I was glad to see that all this work paid off, making my book closer to the finished film. One very minor detail in the script changed during filming, and the studio requested we change that in the manuscript. It was the only change they asked for.

For my book, I added a big battle sequence at the beginning (the battle in DC that happened between the last movie and this one). I was REALLY worried the studio would cut this, and I’m glad they didn’t. I added more scenes with Wesker and made him more of a bad-ass than he’s portrayed in this film. I added a chapter at the end to answer a question left over from the last film, and I added my own “Is this really THE END?” type epilogue for the fun of it. There’s an existential element to the story, and I emphasized that with Alice’s internal thoughts in a number of places. I generally enjoyed writing from her point of view. It was fun to write her as an ultimate warrior who also has a very human side. I also did my best to connect various threads of the script to the other films in the franchise and, in several cases, the novelizations of the previous movies.

I’m really looking forward to seeing how fans of these franchises respond to the books. Hopefully, they’ll enjoy them. If not . . . at least I had fun writing them. AND I got paid!

Want to check out the books? You know you do!