As a creative writing teacher, I sometimes struggle to get concepts across to my students. That’s why I created the Amazing Story Spiral, a visual tool to help students plot stories from character rather than event. (You can read about the Amazing Story Spiral in a previous blog post here: http://writinginthedarktw.blogspot.com/2014/10/the-amazing-story-spiral.html)

Since then I’ve developed three more visual tools for fiction writers (I created all three when I was supposed to be reading student stories – avoidance is sometimes a writer’s best friend!). I’ve drawn pictures of these three tools and while I’m no artist (as you’re about to see), hopefully they’re good enough to get the idea across, 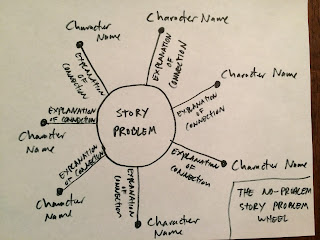 THE INCREDIBLE VIVID FICTION CHART The more vivid fiction is, the more effective it is. Most writers, raised on a steady diet of movies and TV shows, usually only evoke the senses of sight and sound. But we experience reality on so many more levels, and writers need to be able to create the illusion of reality in their fiction by reflecting this richness of experience in their work. I created the Astounding Vivid Fiction Chart to give writers a framework to help make their fiction more vivid. Elements of experience are listed down the left side of the chart: dialogue, thoughts, emotions, sight, smell, taste, touch, hearing, memory connections, and imaginative connections. These last two might need some explanation. Memory connections are associations characters make when something in the present reminds them of something from their past. Imaginative connections are associations a character makes with his or her imaginative, like seeing a spindly, leafless tree in a graveyard and thinking it looks like a skeletal hand emerging from the ground. The vertical sections of the chart represent units of a story – a scene, a paragraph, even a sentence, whichever you choose. As you’re working on a story unit, you can chart the experience details you use by putting a dot, an X, or a checkmark in the appropriate box. You don’t need to use all the different types of details every time. The chart can help remind you to make your fiction more vivid as you write it, but you can also use it to go over parts of a story you’ve already finished and chart how vivid those parts are. If you see you aren’t using enough variety of details or that you’ve fallen into a rut in terms of the details you use and you need to change things up, the chart can give you guidance for revision. 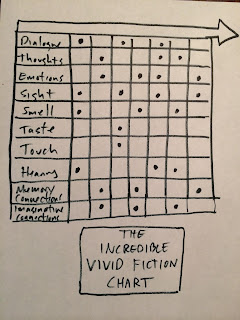 THE ASTOUNDING SCENE DIAMOND Another difficulty students often have is considering the emotional aspects of their scenes as well as the action aspects of their scenes. In fact, they often neglect the emotional aspect altogether. This visual is designed to help writers think of the action level of their story along with the emotional aspect, with the story goal/throughline running through the middle of the chart. Action obstacles are on one side of the throughline, emotional obstacles on the other side. Each scene has both a physical and an emotional obstacle, and each scene has a reaction to the character’s dealing with those obstacles. The action and emotional qualities can be different aspects of the same obstacle. For example, a character wants to confront a rival at work. The confrontation is action. The anger the character feels during the conformation is emotional. The confrontation turns violent, and the rival punches the character. The character decides not to continue the fight and leaves. That’s action. The character also feels anger, shame, and self-loathing for retreating. In each scene, the character deals with both the action and emotional obstacles, reacts to them, then moves on to the next scene. The end of the story the climax has both an action aspect as well as an emotional aspect. The value of this chart is that it continually reminds writers to tend to the emotional level of their stories, making their fiction far richer in the process. 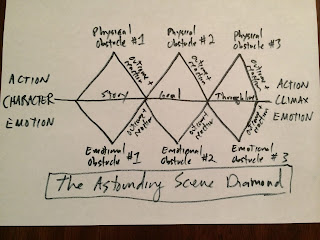 Give these three tools a try and see what they can do for you – and if you’re a teacher, feel free to steal them for your classes, and see what they can do for your students. Let me know how they work for you, and especially let me know if you find ways to improve them. After all, we’re all in this together, right?
Posted by Tim Waggoner at 6:13 PM