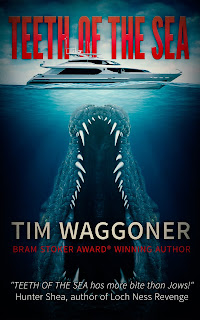 DEPARTMENT OF SHAMELESS SELF PROMOTION
TEETH OF THE SEA
Now that you’ve read my tips on writing action, you know you want to see if I practice what I preach! As I said earlier, my latest novel is a monster thriller called Teeth of the Sea, just out from Severed Press in both print and ebook editions.
They glide through dark waters, sleek and silent as death itself. Ancient predators with only two desires – to feed and reproduce. They’ve traveled to the resort island of Las Dagas to do both, and the guests make tempting meals. The humans are on land, though, out of reach. But the resort’s main feature is an intricate canal system . . .
. . . and it’s starting to rain.
Amazon: https://www.amazon.com/Teeth-Sea-Tim-Waggoner/dp/1925711196/ref=sr_1_1_twi_pap_2?s=books&ie=UTF8&qid=1508006409&sr=1-1&keywords=tim+waggoner
RED ROOM MAGAZINE
My short story “Are You Crazy?” appears in the inaugural issue of Red Room, the Magazine of Extreme Horror and Hardcore Dark Crime.
Amazon: https://www.amazon.com/Red-Room-Issue-Magazine-Hardcore-ebook/dp/B074YKQJD8/ref=sr_1_2?s=books&ie=UTF8&qid=1508006569&sr=1-2&keywords=tim+waggoner
THE WINTER BOX
My Bram Stoker Award-winning novella The Winter Box has been released in a new edition from Crossroad Press.
It’s Todd and Heather’s twenty-first anniversary. A blizzard rages outside their home, but it’s far colder inside. Their marriage is falling apart, the love they once shared gone, in its place only bitter resentment. As the night wears on, strange things start to happen in their house—bad things. If they can work together, they might find a way to survive until morning…but only if they don’t open the Winter Box.
Amazon: https://www.amazon.com/Winter-Box-Tim-Waggoner-ebook/dp/B0768RGKBT/ref=sr_1_1?s=books&ie=UTF8&qid=1508006751&sr=1-1&keywords=tim+waggoner